Home ownership must not be an unattainable dream
March 13, 2018 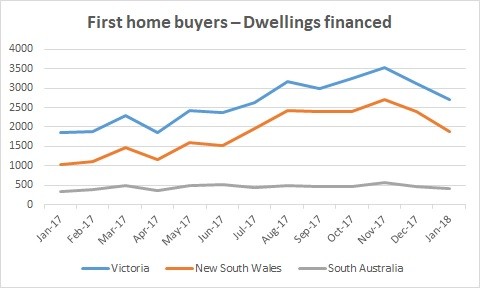 Home ownership will be an unattainable dream for most young South Australians unless stamp duty exemptions are introduced, Master Builders SA says.

According to ABS data out today, the number of loans to South Australian first home buyers fell to the lowest amount in nine months. Just 403 first home buyer dwellings were financed in January, the lowest since 350 in April last year.

Low demand has had no impact on prices – the average loan size for first home buyers ($274,800) in January was the second highest on record.

Master Builders SA Chief Executive Ian Markos said the fall in loans to first home buyers came from an already low base compared with other states and urgent action was required.

“During the election campaign we’ve heard a lot of rhetoric about stemming the flow of young South Australians interstate. Quite frankly, talk is cheap – it’s time the major parties backed policies that will actually deliver results.

“We want more young South Australians in their own homes, but $18,000 in stamp duty becomes a $60,000 noose with interest over the course of a mortgage.

“That’s why Master Builders SA continues to push for the elimination of stamp duty for first home buyers on new builds up to the median house price, which was $465,000 for the December 2017 Quarter.

“I’m flabbergasted there has been no commitment to a policy that has been heralded by the ABS as a massive success since being introduced in July by the Liberal Government in New South Wales and the Labor Government in Victoria.

“It’s good policy that transcends party lines. On its own abolishing stamp duty is not a magic bullet, but it is an important piece of the puzzle.”

In other concerning news, the number of loans to non-first home buyers plummeted to the lowest amount in four years.

The number of dwellings financed in January was 2665, the lowest number since 2637 in February 2014. The average loan size for non-first home buyers was $309,800 – also the second highest on record.

Overall, the number of home loans issued to South Australia hit its lowest level in two years. There were 3502 properties financed in January this year, 40 fewer than the previous low in January 2016.