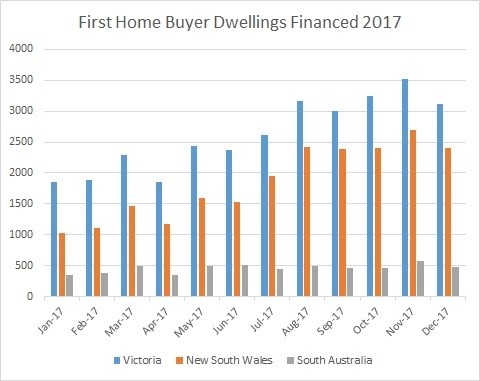 Data released by the ABS once again demonstrates the need for policies to help more young South Australians into their own homes and stimulate the struggling housing sector.

An analysis of the figures shows that the number of first home buyer dwellings financed during the second half of 2017 compared to the first half of the year increased by 47.24% in Victoria and 80.95% in New South Wales. By comparison, South Australia increased by just 12.67%.

“If we are serious about stopping the flow of South Australians interstate, we need to give them reasons to stay. A good job and an affordable home is a great start.

“It’s common sense to base policy on what has been proven to work. Since Victoria and New South Wales introduced their incentives last July, their first home buyers’ markets have been going gangbusters.

“Master Builders SA continues to push for the elimination of stamp duty for first home buyers on new builds up to the median house price, which was $450,000 for the September 2017 Quarter.

“We also recommend that the existing First Home Owner Grant of $15,000 be increased to $20,000 in regional South Australia.

“The eligible transaction can be a contract for the purchase of a new residential premises or a comprehensive home building contract and would be available until 30 June 2021.”

Master Builders is also calling for a review of all taxes and charges related to land and property development.

“House prices are driven up by about 40 per cent by inefficient land release strategies, excessive development levies, taxes and charges, and excessive planning and building requirements”, said Mr Markos.

“For example, South Australian building rules require new dwellings and some extensions or alterations have a rainwater tank to supplement mains water. When Queensland removed this requirement in 2013, the cost of a new home was reduced by more than $5,000.

“Master Builders SA supports consumer choice. We have no problem with rainwater tanks, we just don’t think they should be compulsory. People should have the freedom to make their own decisions based on their own budget, priorities and lifestyle.

“There would be nothing stopping anybody who wanted a rainwater tank from getting one. There would also be nothing stopping them from installing one in the years ahead when it is more affordable. The most important thing is first home buyers at least have the option of getting into their own home as cheaply as possible first.”

According to the ABS, “The number of loans to first home buyers has recorded strong growth in recent months. The increase has been driven mainly by changes to first home buyer incentives made in July by the New South Wales and Victorian governments.”