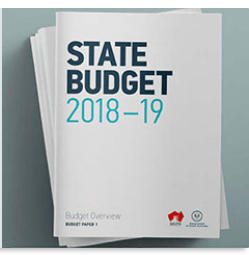 The total infrastructure spend over four years is $11.3 billion. An additional $576 million will be spent on infrastructure than in the 2017/18 Budget. Many of the works include substantial funding from the Federal Government. Projects include:

In partnership with the Federal Government, $202.6 million over 4 years has been committed to create 20 800 apprentices and traineeships through subsidised training and support services developed in partnership with employers, training providers and individuals.

$3.9 million has been committed to a campaign designed to improve community understanding of opportunities available through apprentices and other VET and training pathways.

A 12 month trial to expedite drivers’ licenses for first and second year apprentices.

The Government is spending $109.0 million over five years to bail out TAFE but closing seven campuses.

There is a long overdue crackdown on the bloated public sector. $170 million will be provided for targeted separation packages to cut public servant numbers by more than 4000. The focus will be on government departments that do not have doctors, teachers, nurses, police and child protection workers.

South Australia has the highest percentage of public servants in the nation.

$8.2 million has been allocated for the establishment of Infrastructure SA to provide a transparent targeted infrastructure decision making process.

The tax-free threshold will be increased from the current level of $369 000 to $450 000 from 1 July 2020. A new marginal tax rate of 2.9 per cent for land tax ownerships valued between the existing top threshold (currently $1.2 million) and $5 million will also be introduced.

It is estimated that more than 50 000 land tax ownerships will benefit from the measure including around 8 000 that will no longer have a land tax liability.

$184 million has been committed to improve energy market reliability and make electricity bills more affordable for households. This includes $100 million in grants for a home battery scheme.

Approximately 3200 businesses will become exempt from payroll tax (a saving of up to $44 500 a year) with around 400 businesses expected to receive a reduction in their payroll tax liabilities.

The government has reduced fixed property ESL bills through the introduction of general fixed property remissions of $90 million per annum from 2018/19 – a saving of around $145 in 2018/19 for a median value residential property.

The Marshall Government has failed to deliver any new assistance for first home buyers. For example, a stamp duty exemption for first homebuyers on new builds up to the median house price (similar to what was introduced in NSW and VIC last year) would have stimulated the flat housing market and protected jobs in the industry, as well as helped address the ‘brain drain’ to the Eastern states.

A new industry assistance framework has been established to support economic growth in South Australia. Financial assistance to private sector entities will be delivered through three new designated funds: